Muslim populations were murdering and plundering in the Mediterranean since at least the 9th century. And America was drawn into violent conflict as Muslim pirates from North Africa’s Barbary Coast routinely captured American merchant ships and held the sailors as slaves, demanding ransom and tribute payments in the late 17-1800’s.

Thomas Jefferson became president in 1801. For fifteen years, America had tried to work with the four Muslim powers (Tripoli, Tunis, Algiers, and Morocco) instigating the piracy, but negotiation proved impossible. Realizing it was time to stand up to the intimidation, Jefferson decided to move beyond diplomacy. He sent the U.S. Navy and Marines to blockade Tripoli—launching the Barbary Wars and beginning America’s journey toward future superpower status – and more, deadlier conflicts.

And so it started. But America then fought them in other foreign lands; Iraq, Syria, Afghanistan, Libya and many other countries costing us trillions in wealth and thousands in lives.

75 years ago, the dangers to America would be ships attacking our shores, or planes entering our airspace loaded with bombs for our cities. It was a more visible,  predictable and defendable array of enemy actions we could deal with.

But now we face this enemy as an homeland invader: already here, increasing in numbers and lying in wait to destroy us from within.

Yes, over time, the world and its threats against us changed. War is no longer about taking a hill, not about taking out thousands of soldiers on a battlefield or eliminating a bunker. It’s about killing civilians and creating fear, disrupting our financial stability on wall street, threatening our lifestyle – changing our society.

I submitted my questions on the subversion of America through our jihadi enemy to individuals who know best the threat, and the response we need to bring to bare.

First is Dr. Carl Goldberg. He has made it his patriotic duty to educate his fellow Americans of the negative impact of their jihad against the Western world, and all non-Muslims. In 2014 Dr. Goldberg  was honored as one of “America’s leading Islamophobes” by the Council on American Islamic Relations. (CAIR) 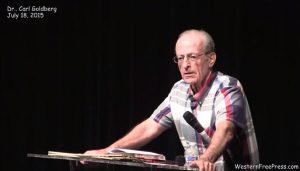 He wears this title as a badge of honor when he’s ask to give his countless speeches on Muslims in America.

Just an FYI – In most conversations, people refer to those who follow Islam as Muslims. Many times, people will use the term Moslem. This isn’t an incorrect spelling. As defined: “A Muslim in Arabic means” one who gives himself to God,” and is by definition, someone who adheres to Islam. By contrast, a Moslem in Arabic means” one who is evil and unjust” when the word is pronounced, as it is in English, Mozlem with a “z.”

As citizens we have seen the physical damage prosecuted by these people and felt the sting of their human executions. We need to be more aware, concerned of them as they make their way into our country, into our society, and yes, into our government.

This is an honest look at an enemy threat already on our shores, lying in wait and training to strike. (An RB-B~ in my questions indicates a follow up question)

The Jihad Assault in America

RB ~ The Islamic threat has been with the world for some time. In simplistic terms, how did the religion of Islam begin ?

CG ~ In the year 610 Muhammad [who was born in Mecca around the year 570] came out of a cave and told his wife that the Archangel Gabriel appeared to him and told him that he was the new prophet of Allah. Thus began 23 years of such revelations. His wife was the first convert to Islam.

RB~B) And recognizing that they are a religion/ideology and not a race, what draws the overwhelming percentage of people it does to its beliefs?

RB ~ What turned/expanded it from its beginning tenets into a world source of terror? Or was it devised from the beginning to be the murderous, dominating group it is today?

CG ~For the first ten years of his preachings, Muhammad was a small minority in Mecca, and his purpose was to merely strengthen the community of believers without violence because he would have been crushed had he tried violence. After he moved himself and his 150 followers to Medina in 623, he began to acquire political power and then military power, largely through highway robbery of the merchant caravans from Mecca. He told his followers that they would gain eternal paradise if they were killed while robbing and killing non-Moslems. That was huge attraction to many Arabs to join his Islamic religious community. After Muhammad died, his successors used the same principle to make war on surrounding countries. Within less than a century after Muhammad’s death, the Moslem empire spread from Spain to India. As you know, the Koran, which is considered Allah’s literal word by all Moslems, commands Moslems to make war on non-Moslems until Islam reigns supreme in the world. So, yes, this was Islam’s goal from the beginning in Medina

RB ~ So many want to believe this is a religion of peace. Are they delusional, or just outright lying to themselves and us for subversive purposes? 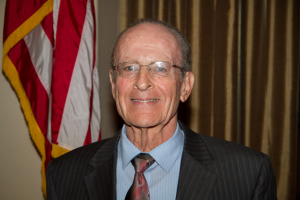 RB ~ The Muslim factor for America dates back the days of the 1700 and 1800s under Presidents Washington, Jefferson, Jackson and Adams. The sea and land battles of the Malay and Barbary pirates became the start of the American “reach” across the seas to protect its assets. Has the world domination goal of Muslims changed (and when) from the marauding days of just pirating and plundering?

CG ~ No change at all in that goal ever since the time of Muhammad. Both the Koran and the sacred sayings of Muhammad very clearly command war until Islam is victorious over all other religions. Piracy was only one way of conducting that war — both for material booty and for capturing slaves.

RB ~ When someone talks to me about the religion of peace, my answer has always been: “I need to know two things. A) How can one book, their “bible” the Quran, talk of peace to some and lying, murdering, controlling to others?”

CG ~ The word “peace” has at least two meanings. “Peace”, as in war and peace, will come about after the whole world is Moslem and there are no more competing religions. Until that time, Moslems are commanded to make war against non-Moslems. The other meaning of “Peace” is the internal feeling of serenity which a believer feels after completely surrendering his will to the Almighty.

And B) “when so many horrific atrocities of beheadings and drownings and other tortures occur, if they’re so peace loving, why don’t their moderate leaders stand up with loud voices and denounce the actions of their radical counterparts?” I’m still waiting for an answer.

CG ~ The answer is that the “radical counterparts” are faithful Moslems who are following the commands of the Koran and Muhammad. The “moderates” have no answer to that because of the internal logic of Islam, namely, that the Koran is the literal word of their god, and the Koran commands war against non-Moslems.

RB ~ Why do they tacitly accept or approve these actions through their silence?

CG ~ Again, because of the internal logic of Islam, they can never criticize anything in the Koran without becoming apostates and losing their identity as Moslems. Their only recourse is to silently just go along as much as necessary.

CG ~ There are some “moderate Moslems”, but there is no such thing as moderate Islam. The “moderate Moslems” are moderate only in so far as they disobey the jihadist, misogynist, homophobic, bigoted and intolerant commands of their god. Other Moslems, like the community leaders, are not moderate at all. They have merely recognized that Islamic domination in America cannot be achieved at this stage by violence — like Muhammad in the early days of his Meccan career. These Moslems know that they must appear moderate until such time as they have enough power to use force. We are talking about the American Moslem leaders from CAIR, ISNA, ICNA, MAS and a whole alphabet soup of such community organizations who share the same Islamic supremacist goals of ISIS, Al Qaeda, The Islamic Republic of Iran, etc.

Next, in part 2, we’ll talk about changing the hearts and minds of jihadists in America and more.

In “Politically Correct” America, we walk that fine line between being aware, cautious and prepared, and blind to threats because we’re open, accepting and inclusive. The problem is that our enemies care nothing about our values and morals. They have a goal; to dominate, control and kill. It’s their mandate from above and they’ll go to meet their god if they fulfill their destiny of hate and destruction.

Our look at radical Islam will continue with views from a military source who has studied this threat in America. Watch for the updates and follow @VideoRon on Twitter.