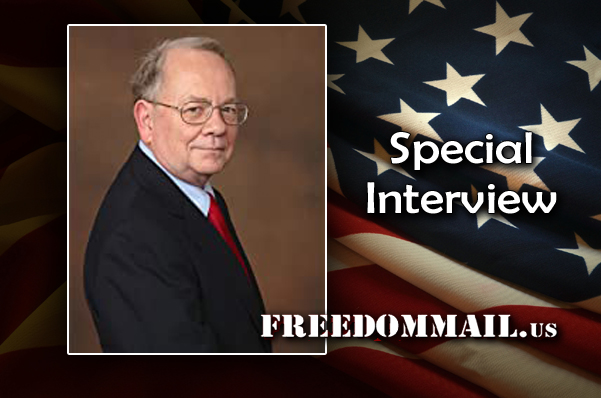 America’s foreign governmental structure is an intricate interweaving of elected, appointed, employed, and contracted individuals: The visible officials, the invisible ones, the military, civilians, obvious and covert elements all working together for the security of our country. Their efficiency and interactions all designed to protect and defend our society, and to guarantee our future as a free nation.

But, it’s abhorrently unconscionable that some treasonous toilers prove incompetent or show deliberate disregard for the protective policies of our government meant to safeguard us against foreign forces of evil and intrusion.

The core and command structure of the foreign service are layered with titles and tales. Stories you would not believe except these are told by someone who was there, saw it, forced to participate and he reveals the critical corruption he witnessed. 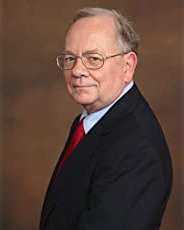 J. Michael Springmann was the former head of the American visa bureau in Jeddah, Saudi Arabia, in the Reagan and former Bush administrations. He entered what he thought was truly honest, important, protective federal career in the Foreign Service as part of the Commerce and State Departments.

His extensive background and experience have brought disturbing revelations to the forefront, through his book, “Visas for Al Qaeda” and this interview. We could write another book to cover everything gone wrong with our foreign service, but here we highlight some of the past and present dangers of a system gone awry. We thank him for his straightforward and firsthand observations and views.

RB ~ Many are chosen for their careers by chance and others by driven desire. What first led you to seek government service?

MS ~ My father had worked for the Treasury’s Bureau of Engraving & Printing. But what set me on the path to government service was my reading The Ugly American, by Lederer & Burdick. The book depicted the failures of the U.S. diplomatic corps, whose insensitivity to local language, culture, and customs and refusal to integrate greatly impressed me. I figured I could do at least as well, in fact better, since I had the proper mindset, planning to go to Georgetown University’s School of Foreign Service.

RB ~ Over time your views and opinions changed didn’t they? In the beginning, were you excited at what you saw as opportunities to serve and make a difference?

MS ~ Yes. It took several tries to get into the Foreign Service, after I graduated from Georgetown. I worked like a demon to overcome my failures to pass the oral exam which followed the written one. The oral was the real test. I had worked at the Commerce Department’s Bureau of International Commerce and was excited just to read the commercial message traffic; I wished I was at the other end sending it. After several failures, I consulted several Foreign Service Officers on what I needed to pass. I was told to write the Board of Examiners for the Foreign Service, expressing my great desire to join the State Department. The advice worked.

RB ~ Can you tell us the job of the Consular Section and its ties to the CIA and Dept. of State?

MS ~ The Consular Section is normally divided into two parts: Citizens’ Services, dealing with everything from passport renewals to notarial services to the identification of dead bodies. The Visa Section handles non-immigrant visas, i.e. visas for tourists, visas for businessmen traveling to close a deal, visas for air, and ship crews. Depending on the country and the State Department’s policy, the Consular Section may deal with immigrant vias or investment visas (companies establishing a subsidiary here, sending management or specialized staff). Nearly every Consulate or Embassy has a Consular Section, some bigger than others. The one at Frankfurt, Germany is the largest in the world.
A Consular Section’s ties to the CIA are in several parts. First, the Agency puts its Clandestine Service Officers in every section of a Foreign Service Post. Secondly, the CIA’s people in a Consular Section issue visas to their contacts with ease, bypassing any kind of control over the visa applicants, as happened with the Blind Sheikh, Omar Abdel Rahman. He had gotten his visa in Khartoum, Sudan mysteriously since his name was on a visa lookout list. After getting his visa, he was in and out of the US without difficulty, despite being listed as someone to exclude at ports of entry.

RB ~Isn’t the issuance of visas one of the first locked gates on the path to protecting America from foreign intrusion?

MS ~ Yes it is. The US, unlike the rest of the world, has no internal alien controls. They are supposed to register with the government annually; However, there are no hotel checks or names passed to the local police or requirements to notify the government if you move, as in Germany

RB ~ You saw firsthand abuse of this important protection, and, in fact, were directed to participate in its wrongful implementation?

MS ~ Yes. Often, when I refused a visa because the applicant could show no ties to his own country or Saudi Arabia strong enough that he had to leave the US and return, I would get a rocket from the Consul General Jay Freres to issue the visas “or else.”

RB ~ There are many in the foreign chain whose actions border on outright treasonous, anti-American behavior. For example, can you give us background and thoughts on Jay Freres?

MS ~ Freres, who was fortunately struck by lightning several years ago while walking in the rain, had an odd background. His first assignment had been Kabul in Afghanistan. He had been Economic Officer, charged with understanding what made the economy of the country work. However, when abducted US Ambassador Spike Dubbs was assassinated in a hotel room, it was Freres who was just outside the door; an odd place for an Econ officer. The Political Officer or one of his staff should have been there. Freres either worked for the CIA or was a fellow traveler, possibly because of his experience in Kabul. I lean towards CIA officials since he was the driving force behind my issuing illegal visas. I tried to track him through the Key Officers Booklet, which used to be printed and available to libraries. (It listed ambassadors, counsel generals, and section heads) Now it’s online only and there are no back editions. This of course precludes following anyone’s career. In Freres’ case, he would be listed somewhere and then disappear for years at a stretch. Not everyone was listed all the time

RB ~ Was Jeddah the hotbed of misconduct and treasonous activity regarding our visa program? And why there?

MS ~ Well, in a way it was. At the time, Saudi Arabia was working closely with the US and Pakistan in recruiting, training, & supporting the mujahideen fighters in Afghanistan. The CIA worked with Osama bin Laden and his family to recruit the mujahideen and build strong points in Afghanistan. Jeddah was the principal city in the Hejaz, the western province of the kingdom, and filled with people who came for the Haj from all over the world and never went home. It was a good place to find recruits. I’m not altogether sure things have changed or if the Agency really restricted itself to Jeddah. Certainly, at one point, former CIA Director John Brennan and his wife were in Jeddah. The wife taught physical exercise while he was Political Officer 1982-1984. I can believe after conversations with some consular officers that the Agency was deeply connected to other consular sections (Wanting inter Alia to troll their visa files) and had been involved in the visa issuance business.

RB ~ People may think that visa mishandlings are small, insignificant gov’t faux pas, but this malfeasance led to the entrance of Sheikh Omar Abdel Rahman, the “blind” Sheikh responsible for the first WTC bombing?

MS ~ Yes indeed. As noted earlier, he was on a watch list and the story was a CIA officer had been the duty officer one weekend. (point of emergency contact after hours/weekends). He supposedly didn’t know how to operate the microfiche list of security risks. As I remark later on, Joseph P. O’Neill said in a Georgetown U. research program that a local hire, a Foreign Service National, had mistakenly issued the visa.

RB ~ Al-Qaeda and ISIS have been prominently front page for 20 years as our enemies, but your insight from the 70’s and 80’s offer their origins from the “Visa for Terrorists Program.”

MS ~ Al-Qaeda, starting in what was once Yugoslavia, was another brand change for the Mujahedeen. Osama bin Laden was there, with several different passports, directing terrorist operations, ably assisted by people he had brought with him from Afghanistan. Later, in Libya, they became ISIS. Prof. Edmond Ghareeb, a Middle East expert, has said there was no al-Qaeda in Iraq until the American invasion. The terrorist groups were closely tied to the US government. To this day, I regret not taking my file of Freres-ordered visas with me when I left. We’d have a list of terrorists. The file was mysteriously shredded after I left Jeddah.

RB ~ With situations in the CIA, State Department, DEA, and other groups, and occurring in South/Central America, as well as the Middle East, how widespread, was this scheme against America’s security?

MS ~ Oh, they don’t see this as a scheme against American security. They think it enhances it!!! It was and likely is still widespread. Gary Webb’s book Dark Alliance reveals CIA drug running. As I mentioned in Visas for Al Qaeda, experts in the Phoenix program in Vietnam were set loose in Central/South America, as well as the Middle East, especially Iraq; Notably Ambassador John Negroponte, active in death squads in Vietnam, Central America, & Iraq.

RB ~And it seems that selling visas to foreigners was a great “second income” stream for FSO’s and others; a danger for America’s security.

MS ~ It was. Occasionally they got caught. I assembled a number of newspaper clippings about visa sales for my book. Many FSOs sold visas for money, some for sex. According to an immigration attorney and former official at the old INS, local staff got into the act, by ensuring that some people, for the right price, got into the visa line and some didn’t. 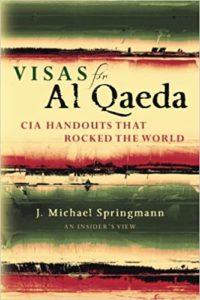 The job performed by our Foreign Service Officers is most important. They handle sensitive information, deal with the localized situations and problems arising from governmental interactions, and in this case, They are the front door to the county – allowing it disallowing people into our borders for personal, business, and sometimes nefarious reasons.

The pervasiveness of abuse and misuse is hidden but still present in our overseas operations. In part 2 we look at more specifics and examine our foreign operations and motives, CIA budgeting abuses, and how visa abuses today are endangering us.