A few weeks ago on a video shoot, I had the pleasure of spending a couple of days with the Editor and Chief Executive Office of World Net Daily – better known to many as WND.com – Mr. Joseph Farah.
He’s an experienced, savvy, well-seasoned journalist who, over the last few years, has continued to build his WND brand with truth, insight and a passion for America. WND.com provides through its online and email editions, the current happenings in our news but also some of the stories ignored or buried by others that inform and educate us to the real goings on that affect our lives.

RB – As you look at today’s journalistic scene, what percentage of legitimate media are doing the American public and service, or disservice in their reporting?

JF – “I’d say less than 1 percent of the press is doing its job. And what is that job? What is the central role of a free press in a free society? To serve as a watchdog on government and other powerful institutions. There is no other answer that is legitimate.

Why? The free press was literally birthed in colonial America. It had never existed previously. Yet, the founding fathers in their wisdom recognized the inherent, inalienable right for a free press for the first time in history and enshrined special protections within the First Amendment of the Constitution. They did that because they believe in lots of checks and balances on government power. That’s why we have a free press in America.

RB – Has the growing number of bloggers and online media added to or degraded the availability of good and truthful information for those seeking it, or are new outlets being created to simply sway the public to agendas and disregarding facts, and for what real ultimate purpose? For in a society gone bad, there is no room for the freedoms of individuals and the press as they now enjoy.

JF – “There’s more truth, but it’s harder and harder to sift through the clatter to find it. The other problem is that so little journalism, in the traditional American-born sense, is being done.”

RB – Where do you see the future of the printed word in newspapers as it’s replaced with electronic media? Will we continue to lose local newspapers and be left with only a very few national publications such as USA Today and WSJ, and if so, how dangerous would that be in offering more slanted views than real news.

JF – “I think there’s a great opportunity for local journalism in print and online. I’m surprised it’s not being exploited more. 85 percent of advertising is local. I would think local online news should be exploding. But it’s really not.”

RB – We know that ego plays a part of what any business does but what do you see as the possible reasons so many media outlets, especially broadcast, have become very liberal and supportive of more progressive agendas? With falling profits, why has there not been more blowback from their stockholders?

JF – “The press has always been ‘progressive,’ more so than society at large. There’s something about the nature of the people it attracts. I know this because I was attracted to the press when I was an ultra-radical leftist. Progressives want to change the world and they see the press and other cultural institutions as the way to do it. That’s why they are advancing. I’m not aware of any stockholder revolt anywhere led by people motivated by truth.”

RB – Are we really dealing with so many “low information voters” that the real truth no longer matters, only the messages of “what’s free, what’s in it for me socially, financially, occupationally, politically?” 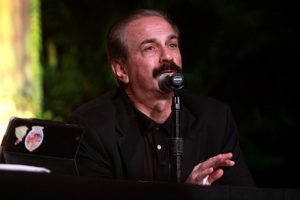 JF – “The public school system has indeed – I believe with intent – dumbed down the populace. The press plays a role in this too. Too many in the press today are disinformation artists rather than real journalists passionate about the truth.”

RB –What will it take to turn the media around into “news reporting,” not “news creating” organizations?

JF – “We just need to keep searching out discerning people. I know we haven’t found them all yet – even in 18 years.”

RB – Do you see yourself moving more into broadcast as well as expanded online news distribution?

JF – ”Absolutely, but the written word is never going away.”

You can read and subscribe to Mr. Farah’s thoughts and those of his contributing writers HERE