“The Problem with History”

He didn’t invent the idea of total government control, he didn’t dream up “wealth redistribution”, he didn’t create the concept of overwhelming the system in order to bring it down and allowing the government bureaucrats to rebuild it in their own likeness. He’s following the dictates and dictators of the past.

Yes, dictators. If you look that word up in an English dictionary it says, “a person exercising absolute power, especially a ruler who has absolute, unrestricted control in a government without hereditary succession.”

If you look it up in a British dictionary it is quoted as saying,

1. “A ruler who is not effectively restricted by a constitution, laws, recognized opposition, etc.”
2. an absolute, esp. tyrannical, ruler
3. A person who makes pronouncements, as on conduct, fashion, etc., which are regarded as authoritative
4. A person who behaves in an authoritarian or tyrannical manner

(more later on this point)

In looking back over the last 6 years of this democratic, progressive, reformist, liberal and dare I say radical group, who follows an agenda of social and economic destruction, we see that the paths of the past are being laid out and even well-trodden again in America. The lessons of politics and morality Obama learned as a youth from his Marxist leaning father, his promiscuous, immoral mother, his mentors such as the card carrying communist Frank Marshal Davis, the Black Liberation, separatist teaching of Jeremiah Wright and hate filled mindset and rants of Rev. Michael Pfleger are ever present in the actions and words of this president.

You have only to read Obama’s own words to reveal the inner hatred and distaste for America, for the white race, for capitalism and the American way of free life. On pages 99-101 “of Dreams from My Father” Barry is quoted as saying “To avoid being mistaken for a sellout, I chose my friends carefully. The more politically active black students. The foreign students. The Chicanos. The Marxist professors and structural feminists and punk-rock performance poets.”

Obama’s father said, “[T]heoretically there is nothing that can stop the government from taxing 100 percent of income so long as the people get benefits from the government commensurate with their income which is taxed.” Obama wrote, “It was into my father’s image, the black man, son of Africa, that I’d packed all the attributes I sought in myself.”

His own grandmother laments, “I look at him and I see all the same things—he has taken everything from his father. The son is realizing everything the father wanted. The dreams of the father are still alive in the son.”

Obama went on to say “But this strategy alone couldn’t provide the distance I wanted… No, it remained necessary to prove which side you were on, to show your loyalty to the black masses, to strike out and name names.” If today we as a people were to “seek out” and “only associate ourselves with white people” would we not be labeled as the racists of the past when “coloreds and whites” didn’t share the same drinking fountains or schools? Was that lesson from the past not done away with and learned as a basis for today? Are we not known by the friends we choose, the associates of our lives, the life we’ve led?

Barry was so aware of race and his desire for separatism at a young age that he “ceased to advertise my mother’s race at the age of twelve or thirteen, when I began to suspect that by doing so I was ingratiating myself to whites.” And when you see the past and continuing associations with the Louis Faraakhans, Al Sharptons and Jesse Jacksons of his black world and realize the vast numbers of associations and appointments of “people from his past” such as Holder, Jarrett, Emanuel, Axelrod, Jones and others with socialistic, yea Communistic and racist leanings, you can see the direction the country is headed under this rule of social liberalism and non-exceptional Americanism.

To digress back to my thoughts earlier about this “dictatorish” style combined with racism, as you look at the definitions above, can you not see what power has been grabbed, a ruler who feels unrestrained by constitutional law or opposition, a person who makes pronouncements, as on conduct, fashion, etc., which are regarded as authoritative – A person who behaves in an authoritarian or tyrannical manner. And add to this Michelle’s attempts at dictating social and school food programs and other activities best left to school, parents, individuals, you see a family pattern of radical controlling behaviors.

Speaking of the Mrs. Obama, her earlier years from the past still dictate her thoughts and actions of today when she wrote in her college years “there was no doubt in my mind that as a member of the Black community I was somehow obligated to this community and would use all of my present and future resources to benefit this community first and foremost. My experiences at Princeton have made me more aware of my “Blackness” than ever before.

And if presidents Reagan, Bush or even Clinton had used “all their present and future resources to benefit the “white” community first and foremost” what would be the backlash from that ideology? Would the country blindly follow them into social and economic oblivion whatever the cost to our souls?

In looking at our present times and considering the connection to the past, we see the action of Obama when it comes to the pattern of communication, campaigning, lying, the controlling of the mindset of, and spewing forth the mush to, the ill-informed, misinformed, low information voters. The growth and control that this president, this dictator, has garnered in the realm of social media and the media at large. The “propaganda of change.”

We have only to look back at dictators of the past to see their views as we see it repeated. “‘Propaganda is vital—the heart of our struggle. We can never abandon propaganda…Use a lot of sleight of hand and smiles with everybody. We must defend our points of view without raising hackles. There will be plenty of time later to crush all the cockroaches.” ~ Fidel Castro, 1955

Hollywood and the youth of America tend to glob onto the ideals and images of heroes, fighters, revolutionaries against social injustice from the past. One Che Guevara, who they openly promote with not a scintilla of knowledge of truth of his life and actions. Yet they proudly wear his image and subtly fall lockstep into the message. As Guevara said in his diaries in 1958, “Much more valuable than rural recruits for our guerrilla force were American media recruits to export our propaganda.”

And who more than Obama uses propaganda to promote his social issues, his lawlessness, his hatred and distrust, his agenda for the downfall of America? Next time you see the image of Che adorned on the t-shirt or poster of a mindless youth or political activist, ask them if they really know this man was NOT a man of the people. He was not a counter-culture hipster icon and champion of the poor.

He helped free Cubans from the repressive Batista regime, only to enslave them in a totalitarian police state worst than the last. He was Fidel Castro’s chief executioner, a mass-murderer who in theory could have commanded any number of Latin American death squads, from Peru’s “Shining Path” on the political left to Guatemala’s “White Hand” on the right. 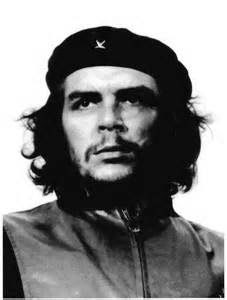 He promised a lot and, not only gave nothing, but took from the people that entrusted their lives to him. It was he and not Fidel who in 1960 invented Cuba’s first corrective work camp, or what the Americans would call a slave labor camp – what the Russians called the gulag.

As Guevara wrote to a friend in 1957, “My ideological training means that I am one of those people who believe that the solution to the world’s problems is to be found behind the Iron Curtain.”

Ah, behind the iron curtain, a metallic cage opened and closed with a steel cable operated by an iron fist. The land of Stalin, and Marx. The ideals contained in the lives of our current president’s past. For nothing is revealed better then Marx’s belief in the words of Louis Blanc in 1851, “From each according to his ability, to each according to his need.” Redistribution at its core – at its best. To read and consider Marx’s Das Kapital, you’ll see the embodiment of the words of Obama to Joe Wurzelbacher (aka Joe the Plumber) before being elected – that he [Obama] was going to raise his taxes to quote “spread the wealth around.”

And to ensure you don’t think this concept of Marxism from the past is lost and limited only to the present administration, and to promote your thoughts for 2016, Hillary Clinton is right in line with the socialistic, communistic traits of the past. In 2010 in the Ukraine she said “One of the problems in societies around the world today is that too much of the productivity of the economies are going to too few. Too few people, the political and economic elite, are realizing the vast majority of benefits from economic activity. It’s true in my own country where, unfortunately, economic inequality is increasing. So part of the challenge of economic growth and prosperity is to make sure it gets down and equally spread among people.”

And her view that “We must stop thinking of the individual and start thinking about what is best for society?” Dangerous for America.

Show us any – ANY – country that has prospered and grown by making the productive people poor, by promising and giving everything to those who choose not to contribute to their societies.

Yes the views of the history, of Communist and Socialist nations, the ideals of dictators and tyrants past, the agendas that drive down productivity and steal freedoms, the rule of ideology instead of law will continue their path of growth in this country if citizens do not look to the past, and learn for themselves that history can repeat itself, IS repeating itself.

Those who cannot remember the past are condemned to repeat it.
~ George Santayana (1905)

falsus in unum, falsus in omnibus (false in one thing, false in all) People exposed to enough proven lies will then not believe the truth. It is therefore imperative to circulate the truth as widely as possible.