The Government’s Needle of Death

The Centers for Disease Control has recommended getting 48 doses of 14 vaccines by age six, and 69 doses of 16 vaccines by age 18. Remember that no US federal laws mandate vaccination, but all 50 states require certain vaccinations for children entering public schools. No shots – no schooling and then you’re breaking the law.

So….Is the Government Killing You and Your Children with their demands?

The U.S.D.A. figures the cost of raising a child today is $233,610 – to age 18 excluding college. And the cost doesn’t figure in things like major accidents, diseases, extended illness etc.

The Government’s Needle of Death:

Some of those extended illnesses could be a result of…. Vaccinations.

CNN made their public announcement last month that “It’s time to call your pediatrician. All children should get a flu shot as soon as it becomes available this season, preferably before the end of October, the American Academy of Pediatrics recommends in a policy statement published early September.

”FLU SEASON” – So, do we Vaccinate or not Vaccinate?

We can outline ideas, throw statistics around and argue one report against another till the ink runs out but I thought it important to talk with someone with first hand, on the ground experience from their respected medical and practical perspectives.

During your life there are people you would really like to meet and Dr Simone is one of them. 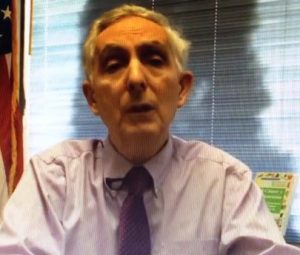 Dr. Simone is known worldwide for his studies and practice related to cancer and now serves as a consultant to major corporations, foreign countries, and had been asked to advise prominent figures, including President Reagan.

We also appreciate his work in other specific areas of general medicine, immunology and specific diseases.

NOTE: We would note that we are not giving medical advice, that’s between the reader and his medical provider. This is presented for your consideration in making your own choices.

RB ~ Every year we hear about the dreaded flu season. “get your vaccinations, don’t spread the flu to others, be prepared for the worst year yet” but what are the real facts on the flu and these various vaccines?

DS ~ More than 200 viruses cause influenza and influenza-like illness infecting the airways and produce symptoms that include fever, cough, sore throat, headache, muscle aches and fatigue. The “flu” commonly occurs in the autumn/winter and is usually self-limiting and can last 1-2 weeks. Influenza is contagious and is spread from person-to-person by droplets produced when an infected individual coughs or sneezes. Complications include secondary bacterial infections like otitis media (ear infections) and pneumonia.

RB ~ Are the vaccines effective?

RB ~ How do they make a vaccine that can treat so many people for months and long periods of time?

DS ~ It’s important to know that forms A and B of the viruses mutate every 2-3 weeks so the flu shot you got today might not protect you in a month when you’re exposed to a new form of the virus.

RB ~ But in essence how effective are the vaccines if we’re supposed to rely on them to save lives?

DS ~ Because of a number of factors overall, it’s been found that flu vaccines are not effective in babies. 51 studies involving 294,000 children aged 6 -24 months found there was “no evidence that injecting them with a flu shot was any more effective than placebo.” In children older than 2 years, it was only effective 33% of the time in preventing the flu. [Cochrane Database of Systemic Reviews. 2 (2008)].

RB ~ What about adults?

DS ~ In studies from the Cochrane Collaboration, (a group of more than 10,000 professionals worldwide that produces systematic reviews of disease progression and treatments) and the Lancet Infectious Diseases journal both found that vaccines were not effective in adults. In a study of 66,000, vaccination reduced the risk of influenza by only 6% and reduced missed work by only 1 day.

RB ~ Aren’t the elderly most at risk and what about them?

DS ~ For the elderly, out of 5,700 articles screened, 64 studies used in the ’98 flu season, “Evidence for protection is lacking,” Lancet and Cochrane, and so it simply doesn’t work. When you look at the flu season of 2016-17, it simple didn’t work and that comes from the National Institute of Health and the Center for Disease Control.

RB ~ What about those who got the vaccine for this year so far?

DS ~ Three-quarters of people who got a flu shot 2018 were not protected against H3N2 flu, the viruses that have caused most flu in what has been one of the most difficult flu seasons in years in the United States, according to the Centers for Disease Control and Prevention.

RB ~ What is the recent history of pregnant women receiving the vaccination?

DS ~ There was a higher risk of miscarriage for pregnant women who received the flu vaccine during both the 2010-11 and 2011-12 influenza seasons. (Information).

RB ~ Can the vaccine actually give you the flu.

DS ~ Yes, indeed the vaccines can give you the flu. We need scientists dictating polices and not politically appointed people.

RB ~ So then Is the flu vaccine dangerous?

DS ~ In specific cases, influenza vaccines were associated with serious harms such as narcolepsy and febrile convulsions, and even a neurologic disease called Guillain Barre.

Studies funded from public sources were significantly less likely to report conclusions favorable to the vaccines. The Cochrane reviews show that reliable evidence on influenza vaccines is thin but there is evidence of widespread manipulation of conclusions and spurious notoriety of the studies.

RB ~ We hear stories of so many vaccines containing other elements including mercury. Is thimerosal present in the flu vaccine and, if so, does it pose any risk to patients? What are we missing when we hear of other problems and warnings?

DS ~ Some flu manufacturers use thimerosal or even mercury itself as a preservative. (Thimerosal Information)

Although the FDA indicates that there is no risk at the preservative doses, there is no need for a person to choose a vaccine that contains thimerosal when other vaccines are available without it.

Given these facts NO COMPANY OR ORGANIZATION SHOULD DEMAND THAT THEIR EMPLOYEES RECEIVE THE FLU VACCINE.

RB ~ Since your entry into the medical or research field, how have vaccines been promoted by the government agencies?

DS ~ Governmental agencies like the FDA and CDC employ scientists but are led by politically appointed people who ultimately approve medicines including the flu vaccine. Scientists should guide our science policies and not politically appointed lay people. The weakest among us, the very young and the elderly, need the most protection because they contract the most complications, and they are virtually not protected by vaccination.

RB ~ Whether people choose to get vaccinated or not, what are the simple steps to avoid catching the flu virus?

DS ~ We do not diagnose disease or recommend a dietary supplement for the treatment of disease. You should share this information with your physician who can determine what nutrition and disease treatment regimen is best for you.

Frequent decontamination techniques of washing hands, face. [Keep in mind that everywhere you go, you touch things other people have touched; Door handles, elevator buttons, escalator railings, car doors, shopping carts, money, items in stores, telephones, even dishes and glasses in restaurants and the candy given out at Halloween. You can pick up viruses and bacteria left by others then transfer that to your face and… you’re exposed.]

Flush your nose with a nasal saline spray to promote mucus flow so that viruses and bacteria can’t lodge. Insert the spray tip in the nostrils perpendicular to the face and direct it toward the ears to get the spray to the exit ports to open them.

Use steam with Eucalyptus oil – boil about an inch of water in a quart size pot, take it away from the stove, add about 10 drops of Eucalyptus oil, and inhale over the pot with a towel over your head for about ten minutes four to five times a day. You may use an over-the-counter Oxymetazoline nasal spray (not a banned substance) as directed. You can add a prescription steroid nasal spray to keep inflammation down but this requires a Therapeutic Use Exemption approval during sports competitions. Insert the spray tip in the nostrils perpendicular to the face and direct it toward the ears to get the medicine to the exit ports to open them. Hydrate to keep the mucus thin and flowing. Also consider:

RB ~ So many people swear by Tamiflu, but isn’t there a better alternative?

Quercetin 500 mg twice per day (nutrient over-the-counter) – interferes with the virus binding onto your cells. Quercetin is an Anti-inflammatory supplement available without a prescription.

Tamiflu’s chemical structure is similar to Quercetin but different enough to allow it to be patented. Despite all the media attention about Tamiflu, here is what the makers of Tamiflu say in their insert (Nov ’09):

Children felt better up to 26 percent faster (1.5 days) than flu patients who did not take TAMIFLU

During this time of year when kids are sick and parents are confused and questioning, we thank Dr. Simone for taking time from his busy schedule to go through some important points on vaccinations. as we take a break from political postings, hopefully this will give a basis to make your healthcare decisions.

(DR. SIMONE’S OPINIONS ON VACCINATIONS ARE HIS OWN BASED ON PERSONAL EXPERIENCE AND SCIENTIFIC DOCUMENTATION AS PRESENTED. YOUR CHOICE TO VACCINATE OR NOT IS CERTAINLY YOUR OWN.)

Dr. Simone graduated from Rutgers College of Medicine and also earned the rare Masters of Medical Science while investigating the cancer killing properties of plant herbals. After training in Internal Medicine at the Cleveland Clinic (1975-77), Dr. Simone was offered a position in the Immunology Branch and Medicine Branch and later in the Pharmacology Branch and Medicine Branch at the National Cancer Institute, National Institutes of Health, Bethesda, Maryland (1977-82). At the National Cancer Institute, he trained in medical oncology and immunology. In 1982 he accepted a position in the Department of Radiation Oncology at University of Pennsylvania, Philadelphia, PA; and in 1985 began as Associate Professor, Department of Radiation Oncology and Nuclear Medicine at Thomas Jefferson University, Philadelphia. Since 1988, he has been the Founder and Director of the Simone Protective Cancer Center.

Media
Dr. Simone appears on hundreds of television shows including 60 Minutes, Prime Time Live, etc; thousands of radio shows, and is written about in thousands of national and international print media. He is sought for medical and politically related issues.

Summary
Charles B. Simone, M.MS, M.D. is one of the few individuals in the world with formal training in Medical Oncology, Radiation Oncology and Tumor Immunology, with expertise in nutrition, cancer prevention, and cancer detection. As one of the first physicians to champion integrative medicine, Dr Simone combines effective conventional and alternative modalities.

Simone Protective Cancer Institute
The Simone Protective Cancer Institute [501 (C) 3 non-profit] was founded by Charles B. Simone, M.D. in 1980 for the purpose of carrying on scientific research, conducting public lectures, and educating people, especially children, concerning prevention, early detection, and treatment of diseases.
Through research and education, we expect to profoundly influence the way diseases are handled in America.

While at the National Institutes of Health and Bethesda Naval Hospital as Commander, Dr Simone commenced a series of outstanding scientific investigations that:
• uncovered the fundamental mechanism of how human white cells kill foreign cells by forming pores in the membrane.
• helped demonstrate how “complement proteins” aid in killing by forming pores in the membrane.
• demonstrated how adriamycin, an anti-cancer drug, operates at the cellular level.
• conceived and developed the idea of splicing monoclonal antibodies to killing cells that seek out cancer cells, called directed effector cell killing.
• provided the foundation for Anthrax killing via membrane pore formation