REMEMBER?….. “Overwhelm the system” that I’ve written about for years?

This concept, by Obama’s mentors, inspiration and guiding light into the abyss of Socialism, is half of the basis of our current destruction direction in this country. The product of the Cloward-Piven approach to Socialism – two Columbia Univ. sociologists.

Add to this another subject of this writing, developed by one Saul Alinsky, and you start to see the influences destroying the once great America. Alinsky’s material was written for a destructive purpose. Not to advance our country. Not to empower citizenry with optimism and hope. Not to build and develop a better society. Not to create an everlasting power source for that “shining city on a hill.” 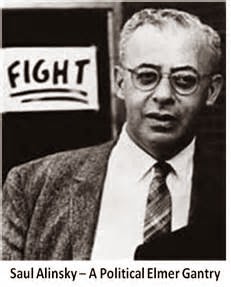 In reading these through you’ll see that it’s not just the goal to “take” from people, but to break their will, their spirit, their desire to live free. Rather to just exist under the blanket of government security and ongoing benefits.

————————————-
In short, Alinsky’s rules are:
RULE 1: “Power is not only what you have, but what the enemy thinks you have.” Power is derived from 2 main sources – money and people.
RULE 2: “Never go outside the expertise of your people.” It results in confusion, fear and retreat. Feeling secure adds to the backbone of anyone.
RULE 3: “Whenever possible, go outside the expertise of the enemy.” Look for ways to increase insecurity, anxiety and uncertainty.
RULE 4: “Make the enemy live up to its own book of rules.” If the rule is that every letter gets a reply, send 30,000 letters. You can kill them with this because no one can possibly obey all of their own rules
RULE 5: “Ridicule is man’s most potent weapon.” There is no defense. It’s irrational. It’s infuriating.
RULE 6: “A good tactic is one your people enjoy.” They’ll keep doing it without urging and come back to do more.
RULE 7: “A tactic that drags on too long becomes a drag.” Don’t become old news.
RULE 8: “Keep the pressure on. Never let up.” Keep trying new things to keep the opposition off balance.
RULE 9: “The threat is usually more terrifying than the thing itself.” Imagination and ego can dream up many more consequences than any activist.
RULE 10: “If you push a negative hard enough, it will push through and become a positive.” Violence from the other side can win the public to your side because the public sympathizes with the underdog.
RULE 11: “The price of a successful attack is a constructive alternative.” Never let the enemy score points because you’re caught without a solution to the problem.
RULE 12: Pick the target, freeze it, personalize it, and polarize it.”
——————————-

Can you get the sensation of oppression? Can you recognize the opposing forces that are contrary to our ways of freedom and hope? Do you notice the controlling, almost slimy means of manipulation to gain power and influence?

Alinsky’s brand of revolution was not characterized by dramatic, sweeping, overnight transformations of social institutions. As Richard Poe expressed it, “Alinsky viewed revolution as a slow, patient process. The trick was to penetrate existing institutions such as churches, unions and political parties.”

To appeal to the middle class, Alinsky believed, “goals must be phrased in general terms like ‘Liberty, Equality, Fraternity’; ‘Of the Common Welfare’; ‘Pursuit of happiness’; or ‘Bread and Peace.’” And who better to manipulate and control than those dependent on government and unaware of your real agenda?

Barry Soetoro, AKA Barack Hussein Obama, AKA “whatever his name is today”, is living proof, the real life embodiment of a radical alliance, a true allegiance to the destructive influences of Cloward & Piven, Saul Alinsky, Communism, Socialism, Marxism, and Fascism.

As part of destroying America EVERYTHING this occupier of the White House does is to take down our society, to enact these rules in his approach to campaigning, to ruling, to controlling, to lying to the American public.
Nothing is below this president in his approach to openly lying, manipulating, changing laws and promoting his fascist agenda to “fundamentally change America.” Heard that before?

To destroy America, you need to develop those Alinsky confrontations, promote the infiltrations and then “overwhelm the system,” and it is realized in five years of recent Democratic governance.

Am I wrong? Am I not seeing the “positive-ness” of this administration? Am I missing some other really nice goals and pro-American accomplishments? I think not.

Got the idea yet how this “Purveyor Of Socialistic Nefariousness” is accomplishing his goals? Has this president not fostered an environment of destruction, encouraged the opportunities for radicals to seize our society and extinguish its flame of freedom for the future?

Is it not time for everyday America to wake up? To get educated on the real direction of this country? To recognize and understand the real agenda of this radical leadership?

It’s not just about a new tax, a different, better healthcare system or cleaner air and water. IT’S ABOUT CONTROL – a little tax here, a small regulation and land grab there, a smidgen of controversy and corruption over there. It’s a little bit at a time until, like the frog in the pot… you’re boiled.